A Pictorial History of the World War II Years 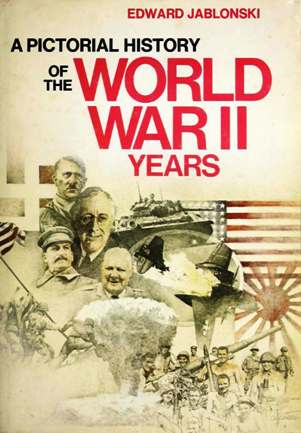 A Pictorial History of the World War II Years

Combines a basic history of World War II with more than four hundred captioned photographs, and features charts, maps, and a wealth of specific facts.

From the deserts of North Africa to the frozen steppes of Russia, from Iwo Jima to Hiroshima, A Pictorial History of the World War II Years examines all the major military operations and campaigns from the air, sea, and land. Watch German tanks thunder across Poland during the infamous blitzkrieg; sit in the cockpit of Luftwaffe and RAF aircraft; experience the monumental sea battles in the South Pacific; share in the heroic efforts of resistance fighters across Europe; relive the bloody storming of the Normandy beaches on D-Day...and much more. Here are the political giants - Hitler, Mussolini, Hirohito, Stalin, Roosevelt, and Churchill - captured both in public and in private. Here too are the mythic military men such as Eisenhower, Patton, MacArthur, Tojo, Montgomery, and Rommel. Perhaps most gripping of all are the photographs of anonymous soldiers in the field and innocent civilian victims trapped in the path of a brutal war. With its concise text and captions, and numerous line drawings and maps that document the tactics, strategies, and goals of both the Axis and the Allies, this is a book for anyone interested in the evolution of war, the power of photography, and the course of history in our age.