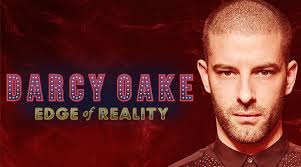 Darcy Oake is an illusionist from Winnipeg, Canada. In his audition for Britain's Got Talent, he massively impressed both the judges and the audience, to the extent that Simon Cowell called Oake "without question the best magician ever on Britain's Got Talent."[14] His audition has been viewed over 52 million times on YouTube.[15]

For his semi-final act, he performed a teleportation illusion. The act placed him in the top three, and after a split judges' vote, it was revealed he was second and sent to the final, making him the first ever magician to make the final of Britain's Got Talent.[16]

His performance in the final was "Time of the Essence" where he was hung upside down within an open human bear trap. He escaped in 52 seconds, right before trap closed, which would have killed him. Oake came 5th overall (8.5%), the second closest a magician has come to winning Britain's Got Talent next to 2015 runner up Jamie Raven.[17]

In December 2014, he had his own ITV show called Darcy Oake: Edge of Reality, which was hosted by Christine Bleakley.